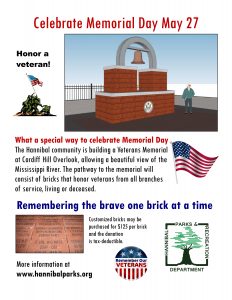 Memorial Day is a day of remembrance, honor, and tribute to those who sacrificed for their country.

The Hannibal Parks & Recreation Department and the Veterans Services Commission are offering a way to honor veterans by being part of the Veterans Memorial and Freedom Bell.

The memorial will be built in Cardiff Hill Overlook, allowing a beautiful view of the Mississippi River. The pathway will consist of memorial bricks. The bricks must have name of a service member, but does not have to be a Hannibal resident, former or current. The bricks may be purchased by loved ones to honor a member of the military. The customized bricks may be purchased for $125 per brick. Additional donors of $500 or more will be listed on a plaque adjacent to the memorial.

More information about the veterans memorial is available at www.hannibalparks.org/news/2018/12/31/veterans-memorial-and-freedom-bell/