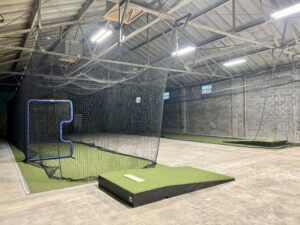 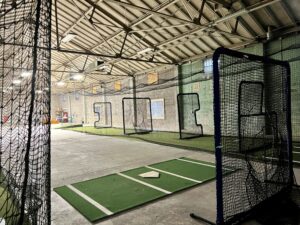 Hannibal Parks & Recreations is officially opening the Clemens Training Facility beginning Nov. 1. The large space will mainly be used for hitting and pitching practice. It includes two batting cages, pitching machines, soft-toss nets, along with tees and soft-toss machines.
The facility is in left field of Clemens Field, the previous clubhouse for Cavemen and later the Hoots. The building has been outfitted with a restroom, new lighting and heating.
“Hannibal has had a need for this type of facility for several years,” says Chad Collier, assistant director for Parks & Recreation. “I know of several people building nets and cages in their garages and sheds at home, out of necessity. We hope this fills a need for those who don’t have that kind of space to dedicate to something like this.”
Teams can schedule practices on Sunday 10 a.m.-8 p.m. or Monday 4-8 p.m. at an hourly rate of $25. Individuals can use the facility on Tuesdays from 5-8 p.m. at $6 per hour, in 10-minute increments. No team or official workouts are allowed on Tuesday evenings. Collier said, “Wwe want to give those kids who aren’t dedicated to a club or team the opportunity to come down and use all the same tools and machines that others get to use. It truly is a facility for all types of players and abilities. At $1 for every $10 minutes, an adult can bring a kid here for half an hour and spend $3. That’s a cheap 30 minutes to be able to spend with a child.”
Collier said the building is still a work in progress and equipment will still be added. The facility will also be used for the newly formed Clemens Cornhole League, which begins Nov. 9 on Wednesdays and Thursdays. Registration deadline is 5 p.m. Nov. 2 at www.hannibalparks.recdesk.com/Community/Home/

Ramp Park to close for season