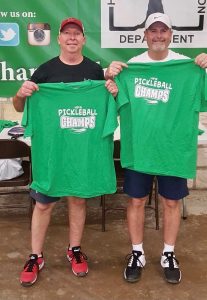 Registration for Hannibal Parks & Recreation Spring Pickleball League is due Friday, March 5. Participants may sign up for leisure, intermediate or competitive league. Play will be on Tuesday evenings at the Admiral Coontz Recreation Center, starting March 16 and ending April 20. There will be a tournament for the competitive league on Tuesday, April 27.

The schedule will be determined after all registrations are received. The cost is $35 per team.