The grand opening for the new playground equipment at Ann Dorsey Hodgdon Park will be 5 p.m. April 11.
Mayor Jim Hark and Central Services Director Andy Dorian will each say a few words welcoming the crowd and Joel Booth from Farmers & Merchants Bank and Trust will share the historic contribution that Ann Dorsey Hodgdon made in Hannibal. Members of Girl Scout Troop 9012 will cut the ribbons to the slides.
The Girl Scout troop chose the equipment for the playground over about 20 different proposals and also chose the colors, blue and gray. The playground includes slides, climbing wall, dome climber, spinning seats and a fish-shaped tunnel. The new playground cost a little more than $68,000.
There is also a new shelter, picnic tables, sidewalks and basketball court. The 11-acre park, which opened in 1974, is located at Rock and Section Streets. 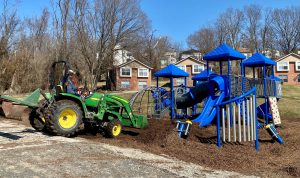