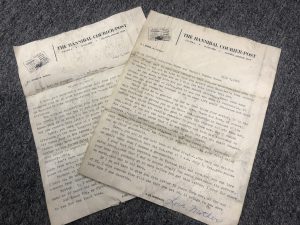 After extensive investigating, parks officials will be able to get some letters written 50 years ago in the right hands.

John Wayne Bowen will receive letters written to him and his brother and his son 50 years ago. The letters were found in the Sesquicentennial time capsule, which was opened in May in Central Park. Parks officials have been looking for Bowen and his relatives since.

The letters were written by Kay Speckhart, who worked at the Hannibal Courier-Post in 1969. She wrote letters to her sons John Wayne and Terrill Eugene Bowen, who were both in the military during the Vietnam War. Both were stationed in New Jersey. Kay Speckhart and her son Terrill Eugene have both since passed away.

Another letter was written to Michael Patrick Bowen, John Wayne Bowen’s son, on his birthday. He was Speckhart’s first grandchild.

Michael Patrick Bowen lives in Breese, Ill., and is coming to Hannibal to get the letters.

On May 1 of this year, parks employees opened the vault to have the time capsule ready to open on May 4. It was discovered that about 40 plastic bags were in the vault, most of them waterlogged, some completely. Park staff pumped out about two feet of water. Park staff retrieved the items and attempted to dry out the items. Some of the items could be salvaged but some were unrecognizable.