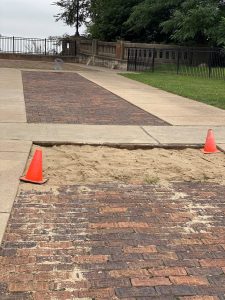 Bricks at Cardiff Hill Overlook have been moved to prepare for construction of the Veterans Memorial. Memorial bricks were being placed at the site starting at the beginning of the year, but have been temporarily moved due to heavy machinery that will be used in the construction.

There have been about 350 memorial bricks ordered. The project has been organized by the Hannibal Parks & Recreation Department and the Veterans Services Commission. The Veterans Memorial and Freedom Bell will be built on Cardiff Hill Overlook, allowing a beautiful view of the Mississippi River. The pathway will consist of memorial bricks. The bricks must have the name of a service member, but does not have to be a Hannibal resident, former or current. The bricks may be purchased by loved ones to honor a member of the military. The customized bricks may be purchased for $125 per brick. Additional donors of $500 or more will be listed on a plaque adjacent to the memorial.

Information for bricks and donations available at www.hannibalparks.org.