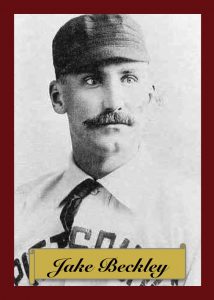 Old time “base ball” (as it was originally called) is coming to Hannibal on Aug. 17 at Huckleberry Park. Two out-of-town teams and a local team will play round robin games at 11 a.m., 1 p.m. and 3 p.m.

Vintage base ball has become a popular pastime across the country. Players compete wearing period reproduction uniforms and follow the 19th century rules of play. The teams competing on Aug. 17 will be honoring the legacy of Hannibal’s own Jake Beckley.

Beckley was born in Hannibal on Aug. 4, 1867, the son of Bernhart and Rosina (Neth) Beckley. He played ball locally, and one of his Hannibal teammates, Bob Hart, encouraged the Leavenworth Oilers to hire the 18-year-old athlete. Jake Beckley went on to a successful career, debuting in the Major League on June 20, 1888, for the Pittsburgh Alleghenys. His last MLB appearance was on June 15, 1907, for the St. Louis Cardinals. Beckley’s Major League career yielded a .309 batting average, 2,930 hits, 87 home runs, and 1,578 runs batted in. He was inducted into the Baseball Hall of Fame in 1971.

Hannibal is celebrating its Bicentennial year by honoring residents who have made their mark on history. A Jake Beckley collector’s card has been printed as a Bicentennial keepsake along with cards of nine other famous Hannibalians. These cards are distributed by the Tom & Becky ambassadors.