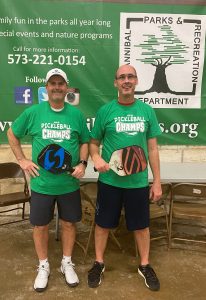 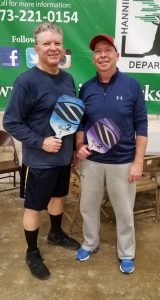 Justin and Jack Parker won the intermediate division with the overall best record.

There were eight teams in the competitive league, 14 teams in the intermediate division and six teams in the leisure league. The next league begins Monday, March 2.

Courts will be designated for competitive, intermediate and leisure players.  Players are welcome to “drop in” and play games.  Four players start on a court; when a game is complete, the winners will remain on the court and separate. The losers will go to the bench. Two new players from the bench will join the new game. This system allows people to play with new partners.

Pickleball nets are available at the Admiral Coontz Recreation Center 7:30 a.m. to 5:30 p.m. Monday through Thursday and 7:30 a.m. to 5 p.m. Friday. There are also pickleball courts at Norfolk & Southern Multisports Park, 621 Warren Barrett Drive; and at the Huckleberry Park tennis courts.

Pickleball is a racquet sport that combines elements of badminton, tennis, and table tennis. Players use solid paddles made of wood or composite materials to hit a perforated polymer ball, similar to a wiffle ball, over a net.

Information is available by emailing jmcdonald@hannibal-mo.gov or calling 573-221-0154.