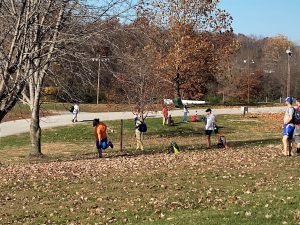 Hannibal’s disc golf course was busy Saturday as a record number of participants were in the Don Crane Memorial Huck Finn Open disc golf tournament. Event organizers said 89 people were in the tournament, with the first round at Huckleberry Park in Hannibal and the second round at Flower City Park in Palmyra.

John Shaw of Excitement Disc Golf organized the tournament. He said the nice weather was part of the reason for the high turnout. “Hannibal has a great disc golf course and it’s well maintained. People really enjoy playing here.”

He said tournaments bring a lot of people to town, eating at restaurants, buying supplies and gas and staying in hotels. “People came from all over to play in this tournament,” he said.

He said interest in disc golf has increased due to the Covid-19 pandemic because the sport is outside and allows for social distancing between players.

Disc golf is similar to traditional golf, however, instead of using golf clubs and balls aiming for a hole, disc golf players use disc golf discs and aim for a disc golf basket which is a pole extending up from the ground with chains and a basket where the disc lands. The object of the game is to complete each hole in the fewest number of throws, starting from a tee area and finishing with the disc coming to rest in the basket.