Sundial back at home at Hannibal riverfront

Home » News » Sundial back at home at Hannibal riverfront 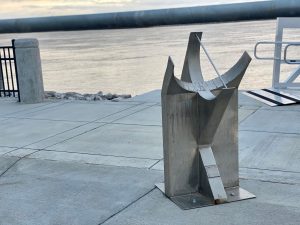 The sundial Scott Haycraft built 14 years ago is now back in its location at Glascock’s Landing on the Hannibal riverfront.

Haycraft built the 200-pound sundial with stainless steel. “I wanted to make something that was functional art,” he said.

He said he researched how to build a sundial so it would tell the time of day correctly. A sundial tells time using the position of the sun.

Haycraft said it took him about two months to build the sundial. “I thought it would fit in well at the riverfront,” he said. Haycraft is operations manager with Hannibal Machine.