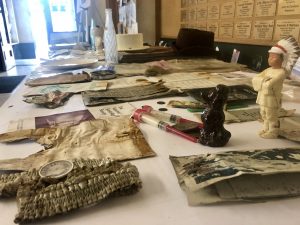 The items in the 1969 time capsule have been itemized.

Hannibal Parks & Recreation staff opened the time capsule on May 1 and displayed the items to the public on Saturday, May 4. The items are now on display at City Hall.

When the vault was opened, parks employees discovered about 40 plastic bags, most of them waterlogged, some completely. Park staff pumped out about two feet of water.

Park staff retrieved and attempted to dry out the items. Some of the items could be salvaged but some were unrecognizable.

Items from the Sesquicentennial Time Capsule Opened May 2, 2019:

Many items had some significant water damage and were not able to be inventoried. We did the best we could identifying what we could; it was a huge disappointment to open the vault and discover items from 1969 were floating in water.