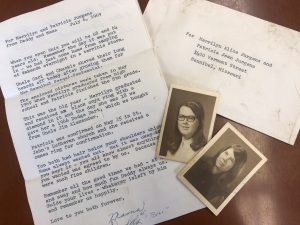 Merrilyn and Patricia Jurgens will be able to finally see the letter their mom wrote 50 years ago.

It was the only letter in pristine condition from the Sesquicentennial time capsule, which was opened in May in Central Park.

Hannibal is celebrating its 200th birthday. During Hannibal’s Sesquicentennial in 1969, residents buried a time capsule under four feet of dirt in Central Park.

In May, parks employees opened the vault to have the time capsule. It was discovered that about 40 plastic bags were in the vault, most of them waterlogged, some completely. Park staff pumped out about two feet of water. Park staff retrieved the items and attempted to dry out the items. Some of the items could be salvaged but some were unrecognizable.

The letter from Merrilyn and Patricia’s parents was the only letter that withstood the time. A few were legible but most were destroyed.

The letter includes photos of Merriyn as a high school senior and Patricia in 8th grade.