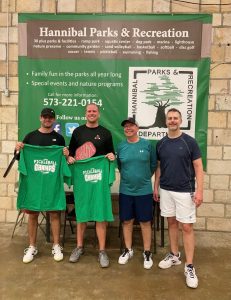 The Hannibal Parks & Recreation Winter Pickleball League ended Tuesday with a single-elimination tournament in the competitive division.
Collin Anderson and Jamie Nemes were the winners; with Bill Baker and Allan Atkins winning second place.
Chris Hull and Elijah Hull won the intermediate division with the overall best record.
There were 11 teams in the competitive league and nine teams in the intermediate division.
Registration for Spring Pickleball is open and registration is available at the Hannibal Parks & Recreation office in City Hall, 320 Broadway.
Participants may sign up for leisure, intermediate or competitive league. Play will be on Tuesdays starting March 22 at the Admiral Coontz Recreation Center and at the Huckleberry Park courts.
There will be a tournament for the competitive league on Tuesday, May 3.
The registration deadline is March 14. The cost is $35 per team (doubles only). More information is available by calling Jenna McDonald at 573-221-0154 or emailing jmcdonald@hannibal-mo.gov.