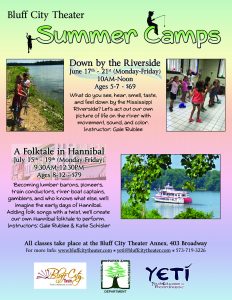 Summer Camp is being offered by Hannibal Parks & Recreation and Bluff City Theater this summer.

There are two sessions (this is session 2):

Participation is limited and each child must be pre-registered. All classes take place at Bluff City Theater Annex, 403 Broadway.

The camps will be directed by Gale Rublee, who has a bachelor’s in fine arts degree in theater from Stephens College and spent time in Hollywood pursing an acting career. She returned to St. Louis where she became a professional storyteller and teaching artist. She volunteered as a Teacher-Naturalist for school groups at the Missouri Botanical Garden’s Shaw Nature Reserve for 13 years and completed a Master Naturalist certification in 2015. Having moved to Hannibal three years ago, Gale is now the youth coordinator and acting teacher for Bluff City Theater’s Academy and YETI (Youth Education Theater Initiative) program.

Contact Rublee at yeti@bluffcitytheater.com or call Bluff City Theater at 573-719-3226 for more information on these camps.

The Hannibal Parks & Recreation Department has developed Scavenger Hunts to encourage visitors to the Hannibal parks. Hannibal children, along with visitors to Hannibal, will have a chance to explore our parks in a different way. These free activities allow participants to learn more about Hannibal Parks and to earn a free treat from a local business in the process!

Here are the scavenger hunts available so far (check back for future additions).