Home » Event » Movie in the Park 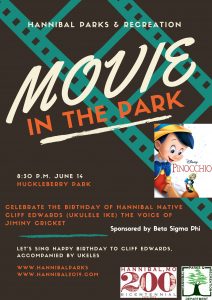 Hannibal Parks & Recreation will host a special Movie in the Park June 14 at Huckleberry Park with a showing of “Pinocchio.” The movie is sponsored by Hannibal’s Beta Sigma Phi sorority.

As part of Hannibal’s Bicentennial celebration,  the event honors Cliff Edwards, who was born June 14, 1895, in Hannibal, and provided the voice for Jiminy Cricket in “Pinocchio.”

Edwards, known as “Ukulele Ike,” was a musician, singer, actor and voice actor, who enjoyed considerable popularity in the 1920s and early 1930s, specializing in jazzy renditions of pop standards and novelty tunes. He had a number-one hit with “Singin’ in the Rain” in 1929.

The movie will begin at 8:30 p.m. in Huckleberry Park, on the grassy area behind the tennis courts. In honor of Edwards, “Happy Birthday” will be sung, accompanied by his signature instrument.

Hannibal’s Tom Sawyer and Becky Thatcher will introduce the movie. The concession stand at the Ramp Park will be open before the movie.

The Hannibal Parks & Recreation Department has developed Scavenger Hunts to encourage visitors to the Hannibal parks. Hannibal children, along with visitors to Hannibal, will have a chance to explore our parks in a different way. These free activities allow participants to learn more about Hannibal Parks and to earn a free treat from a local business in the process!

Here are the scavenger hunts available so far (check back for future additions).