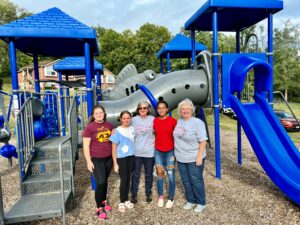 The Girl Scouts who chose the playground equipment were able to cut the ribbon signifying the grand opening of the playground at Ann Dorsey Hodgdon Park.
The park has long been a part of the neighborhood at Rock and Section Streets, but the playground was added recently with the help of Girl Scout Troop 9012. After seeking more playgrounds in Hannibal since flooding had closed Kiwanis Park playground in 2019, the Girl Scouts were given the chance to help choose equipment for an existing park.
The Girl Scout troop chose the equipment for the playground over about 20 different proposals and also chose the colors, blue and gray. The playground includes slides, climbing wall, dome climber, spinning seats and a fish-shaped tunnel. The new playground cost a little more than $68,000. There is also a new shelter, picnic tables and sidewalk. The 11-acre park, which opened in 1974, is located at Rock and Section Streets.
Joel Booth, vice-president at Farmers & Merchants Bank and Trust shared the historic contributions made by Ann Dorsey Hodgdon. She was born in Hannibal and graduated from Hannibal High School in 1927 before females were allowed to take part in sports. But attending Belmont College in Nashville, she developed a love for physical activity through intramural sports. She petitioned the student council requesting that all students receive regular physical education as a balanced curriculum. She requested that proper facilities be made available to every student.
Upon graduation from Ward-Belmont with her bachelors of arts degree, she attended Washington University in St. Louis, Mo, earning a master’s of Arts degree, specializing in personnel work. She began work at the unemployment compensation commission in Jefferson City and in Hannibal during the height of the great depression. She was promoted to a Junior Claims deputy in St. Louis. She was named among the first ten persons appointed as junior claims deputies following merit examinations with only two of them being women.
In 1942 she joined the Women’s Auxiliary Army Corp. Not only did she join, she was among its first members and passed the necessary academic and physical testing with flying colors. In 1949 Hodgdon began her formal employment at Farmer & Merchants Bank (Now F&M Bank and Trust Co.) and worked in many different roles until her retirement in 1962. At that time she became a director of the bank, making her only the second woman to serve on the board of directors at the bank. Just to put things into perspective, in 1960 woman achieved the right to open a bank account and it was not until 1974 that women could open a credit card in their own name. However, in 1962 she sat on the board of a bank, governing the major financial decisions, affecting the lives of thousands of her fellow citizens. Hodgdon served on the board, with distinction until her death in 1974.
Upon her death, she gave large gifts to Levering Hospital, Hannibal Public Library, and Trinity Episcopal Church. She also gave $60,000 to the city of Hannibal for the development of four neighborhood parks or play lots. One to be located in each quadrant of the city. A gift that today would be worth more the $580,000.
Booth said, “I think we can all agree she was a remarkable woman who deserves to be remembered.”

Trout can be harvested starting Feb. 1