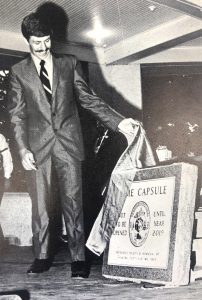 The time capsule in Central Park will be unveiled at 10 a.m. May 4.

The time capsule opening coincides with the Opening Day of Central Park Farmer’s Market. The Market opens at 7:30 a.m.

Tony Bowman, who designed the official emblem for the Sesquicentennial, will be the emcee. Mayor James Hark will give remarks. A band called Sesquicentennial Survivors will perform in the bandstand after the time capsule is opened. The band consists of Dale Hayes, George Roberson, Rachel Bringer Shepherd, Wes Mitchell, Larry Taylor and Betty and Martin Miller. Other musicians may be added.

Tom and Becky will be handling out raffle tickets to anyone who wants to participate in opening the time capsule.

Hannibal is celebrating its 200th birthday. During Hannibal’s Sesquicentennial in 1969, residents buried a time capsule. There will be another time capsule buried in October that will be opened in 2069.

Here are some of the items that are in the 1969 time capsule, according to published reports at the time: