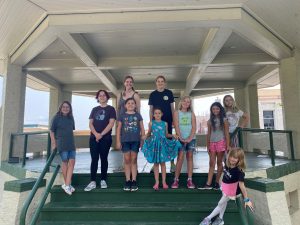 Maples Repertory Theatre is in Hannibal this week, working with Hannibal children to put on the musical, “The Most EPIC Birthday Party Ever,” in partnership with Hannibal Parks & Recreation and Hannibal Arts Council.

The performance will be at 10 a.m. Saturday, July 24 in the Central Park bandstand.

Two fully-vaccinated, professional theatre directors are teaching the youngsters a musical in five days, which will culminate in a performance for parents, friends, and the community.

Sage Tokach and Emily Long, education directors at Maples Repertory Theatre in Macon, said, “We are thrilled for the opportunity to work with the cast week. Maples Rep is traveling to Hannibal for the first time and hope to continue this wonderful partnership in the future!”

“The Most EPIC Birthday Party Ever” is a musical about Skyler and her older brother Charlie, who have never gotten along. But, during Skyler’s mysterious 12th birthday party, their rivalry reaches EPIC proportions. This musical teaches a big lesson in responsibility and respect for each other.