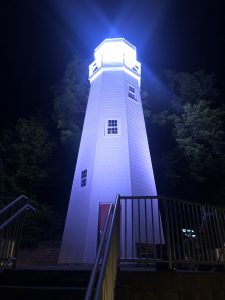 Construction of the Mark Twain Memorial Lighthouse has been completed and the lighting component installed.

The Hannibal Parks & Recreation and Board of Public Works collaborated on the project to make the lighting component something special. The BPW installed a lighting system outside the lighthouse and at the top and a LumenPulse representative from Springfield, Mo., programmed the lighting sequence.

Jared Steward, electric line superintendent for BPW, said that three floodlights were mounted outside the lighthouse, with several different colors of LED lights. In the cupola top of the lighthouse, seven light bars were mounted, giving the lighting sequence even more options. “There were many combinations to choose from,” Stewart said. “It really puts off a lot of light at night.”

The lighthouse will be lit brightly white during the week and on weekends will have different lights depending on the date, for instance this weekend there will be red, white and blue all over the lighthouse to commemorate Flag Day.

Mary Lynne Richards, recreation supervisor for marketing and special events at Hannibal Parks & Recreation, said there will be a light show at 9 p.m. Thursday, Friday and Saturday. “For one minute, the lighthouse will go through a kaleidoscope of colors and sparkling lights. It will be such a treat to see,” she said. “The best view will be from Main Street.”

She encourages anyone who videos the lightshow to post the video on social media using the hashtag #lighthouselightshow.

Andy Dorian, Central Services director, said there will be a dedication ceremony for the new lighthouse scheduled in the fall.

The Mark Twain Memorial Lighthouse — purely ornamental and not meant for river navigation — was built in 1935 to commemorate Mark Twain’s 100th birthday. Strong winds leveled it in 1960, and three years later it was rebuilt. The lighthouse underwent a two-year renovation in 1994, and since then, severe water damage and rotting wood have taken a toll on the structure.