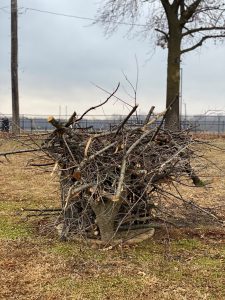 Cutline: The eagle’s nest built Sunday by volunteers and members of the Mississippi Hills Master Naturalists as part of the nature program in Kiwanis Park (photo by Mary Lynne Richards). 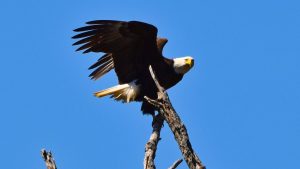 An eagle perched high above the river in Marion County (photo by Gloria Straube).

With the weather getting colder, it is prime time to see eagles on Hannibal’s new riverfront. An eagle’s nest was built last weekend at Kiwanis Park, during the Hannibal Parks & Recreation “All About Eagles” program.

The nest will be left there for a few weeks. Nature interpreter Gale Rublee and members of the Mississippi Hills Master Naturalists provided the base for the eagle’s nest as a learning tool at the program.

Gloria Straube, local conservationist and wildlife ethologist, shared photos of eagles that make the Hannibal area their home. She said there are four eagle nests in Marion County and 12 in Pike County. “They are all on private land and in close proximity to the river. Eagles nest in the tallest living trees that resemble a canopy with many branches.”

She said the opportunity to see eagles is great along Hannibal riverfront. “The best time to see the eagles is dusk and dawn, which is when they are out hunting for food. Sunrise to 10 a.m. is really best, in the afternoon they will likely be soaring up high. However, this time of year they are out all day long. “

She recommends using a binoculars and a spotting scope, which is a small telescope, to see eagles up close.

Missouri’s annual mid-winter eagle survey (which is conducted by the Missouri Department of Conservation each January) usually records more than 2,000 birds in the state. This count makes the Show-Me state one of the leading states in wintering eagle populations.