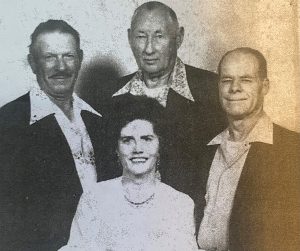 There have been senior adult dances at the Admiral Coontz Recreation Center for 48 years and though the names have changed, both for the band and the members, the Uptown Strings have performed the entire time.

A carry-in and special celebration is planned for Sept. 28 to celebrate the 48th year of performing.

Senior adult dances are noon to 3 p.m. every Tuesday at the Admiral Coontz Recreation Center.

Betty Parsons Miller has been playing for the entire 48 years, but the name of the band has changed. “We started out as the Forget-Me-Nots because we played for the Forget-Me-Not Club in New London.”

The band was also called Deep River and The Misfits until a former band member, AL Swigert, suggested Uptown Strings.

Over the years, the group has played Big Band music, jazz and country and have played with a variety of instruments, Miller said, “Fiddles, saxophone, trumpet, tuba, bass guitar, rhythm guitar and of course drums,” which Miller plays.

She said all five played an instrument and surprised her a recent Christmas by playing a carol for her.

Currently the band for the Senior Dances, called Uptown Strings, consists of Martin and Betty Miller, Harlon Lain, Wendell Glance and Greg Cornelius. Special guests often join the band. Miller is the only original member still with the band.