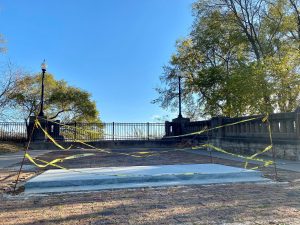 Construction has begun on the veterans memorial on Cardiff Hill Overlook but there is still time to honor veterans and contribute to the memorial.  Veterans Day is a federal holiday that honors all military veterans who have served in the U.S. military and is observed annually on Nov. 11.

Construction on the project began in September. Bricks already installed at the site were moved to prepare for the heavy machinery that will be used in the construction. There have been about 350 bricks ordered but additional bricks may be added even after the memorial is built.

The project has been organized by the Hannibal Parks & Recreation Department and the Veterans Services Commission. The Veterans Memorial and Freedom Bell will be built on Cardiff Hill Overlook, allowing a beautiful view of the Mississippi River.

The pathway around the memorial will consist of memorial bricks. The bricks must have the name of a service member, but does not have to be a Hannibal resident, former or current. The bricks may be purchased by loved ones to honor a member of the military. The customized bricks may be purchased for $125 per brick. Additional donors of $500 or more will be listed on a plaque adjacent to the memorial. Information for bricks and donations are available at www.hannibalparks.org.

The memorial will include a bell from the U.S.S. Hannibal ship, which the U.S. Navy built in 1898. The craft was used in World Wars 1 and 2 and Spanish America War. The ship was decommissioned in 1944 and sunk off coast of Virginia and made into a reef. Even though the ship was named after the general, not the city, the Navy sent the city of Hannibal the bell in the late 1940s. The bell was located in Kiwanis Park for years.