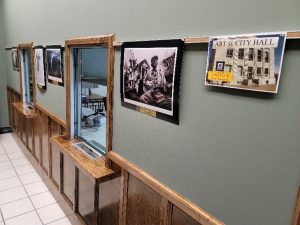 Hannibal, MO – The Hannibal Arts Council is kicking off a new addition to its Art @ City Hall partnership with the City of Hannibal. For some time, HAC has placed pieces on loan in various departmental offices within City Hall and will now be adding pieces to a new display in the Collector’s Office.

The Hannibal Arts Council was approached by the staff to offer suggestions on how to display art in their new customer service lobby in City Hall. It was quickly determined not only how to hang what, but also what work to feature – Select winners from the 2022 HAC Young Masters exhibit held at HAC in April. During the exhibit works by fifteen students were presented with special Young Masters Select awards, with awards given at the fifth and eighth grade levels as well as recognizing students participating in Hannibal High School art department classes.

Beginning in June, photographic reproductions of the HHS Young Masters Select award-winning pieces will be hung in the Collector’s Office. Winners from HHS included are Lindsey Brown, Sidney Zimmerman, Elaina Dyke, Khloee Hinton and Addie Carlson. Their work will be featured through September, followed by eighth grade winners October-January, ending with fifth grade winners February- May.

The public is welcome to stop by City Hall, 320 Broadway, to view the exhibit.

Mermaid and Shark School at the Aquatic Center